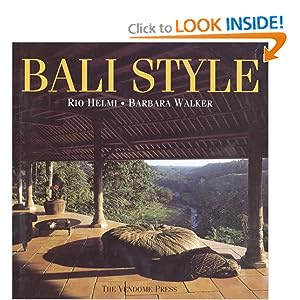 This Book have More than 200 full-page color photos about essence of the Indonesian island's architectural and interior design style, which ranges from relatively primitive bamboo dwellings to classy contemporary homes. Bali art forms are also included in a beautiful, detailed coverage of the Indonesian island's culture, history, and art.
Bali's culture is a blend of ancient traditions and influences from the outside world, with the Balinese sense of art expressed in their art and design, architecture and music. In this book, illustrations present a view of the architecture, interiors and objects that are the essence of Bali's style. From bamboo dwellings to contemporary Bali homes, from panoramic vistas to pictures of the elaborate stonework in Hindu temples - various aspects of this distinctive culture are examined.
Excellent photos of the best houses, bali villas building materials, garden, swimming pools,  fabric, crafts, and architectural villa pulu details in Bali. Very beautiful as a coffee table book, quite useful as a style reference book.

The text is very nicely written, without repetition or fluff; it serves mainly to illuminate the huge variety of photographs. In other words, the reader will learn a little about Balinese geography, sensibility and culture from Walker, but not in intricate detail or with scholarly authority. I read it cover to cover in a couple of days, and felt it was a decent grounding in Bali  style.
Author, editor and photographer should be praised for finding examples of all kinds of Bali style: garish, sublime, fancy, plain, funky, sophisticated, folksy, casual, formal, sacred.
A solid overview, useful to decorators, architects, mere Bali fans.
Posted by Ketut Widarta at 1:30 AM No comments:

Amazon Best Books of the Month, February 2010: From a single, abbreviated life grew a seemingly immortal line of cells that made some of the most crucial innovations in modern science possible. And from that same life, and those cells, Rebecca Skloot has fashioned in The Immortal Life of ...

Amazon Best Books of the Month, July 2010: The past haunts in Tana French novels. That which was buried is brought to light and wreaks hell--on no one moreso than Frank Mackey, beloved undercover guru and burly hero first mentioned in French's second book about the Undercover Squad, The ...

3.     Matterhorn: A Novel of the Vietnam War
by Karl Marlantes

Amazon Best Books of the Month, March 2010: Matterhorn is a marvel--a living, breathing book with Lieutenant Waino Mellas and the men of Bravo Company at its raw and battered heart. Karl Marlantes doesn't introduce you to Vietnam in his brilliant war epic--he unceremoniously drops you into the jungle, ...

Amazon Best Books of the Month, November 2010: From Laura Hillenbrand, the bestselling author of Seabiscuit, comes Unbroken, the inspiring true story of a man who lived through a series of catastrophes almost too incredible to be believed. In evocative, immediate descriptions, Hillenbrand unfurls the story of Louie Zamperini--a ...

5.     The Warmth of Other Suns: The Epic Story of America's Great Migration
by Isabel Wilkerson
Random House
September 7, 2010
Hardcover

A Look Inside The Warmth of Other Suns The author's father as a Tuskegee Airman ...
6.     Freedom: A Novel
by Jonathan Franzen
Farrar, Straus and Giroux
August 31, 2010
Hardcover

Amazon Best of the Month, August 2010: "The awful thing about life is this:" says Octave to the Marquis in Renoir's Rules of the Game. "Everyone has his reasons." That could be a motto for novelists as well, few more so than Jonathan Franzen, who seems less concerned with ...

Amazon Best Books of the Month, May 2010 As the finale to Stieg Larsson's Millennium Trilogy, The Girl Who Kicked the Hornet's Nest is not content to merely match the adrenaline-charged pace that made international bestsellers out of The Girl with the Dragon Tattoo and The Girl Who Played ...
8.     To the End of the Land
by David Grossman
Knopf
September 21, 2010
Hardcover

Amazon Best of the Month, September 2010: To the End of the Land is a book of mourning for those not dead, a mother's lament for life during a wartime that has no end in sight. At the same time, it's joyously and almost painfully alive, full to the ...


From Publishers Weekly
Although Lewis is perhaps best known for his sports-related nonfiction (including ...

Amazon Best Books of the Month, April 2010 Printing presses whirr, ashtrays smolder, and the endearing complexity of humanity plays out in Tom Rachman's debut novel, The Imperfectionists. Set against the backdrop of a fictional English-language newspaper based in Rome, it begins as a celebration of the ...

Amazon Best Books of the Month, March 2010: In her witty and wise debut novel, newcomer Helen Simonson introduces the unforgettable character of the widower Major Ernest Pettigrew.  The Major epitomizes the Englishman with the "stiff upper lip," who clings to traditional values and has tried (in vain) to ...

14.     Operation Mincemeat: How a Dead Man and a Bizarre Plan Fooled the Nazis and Assured an Allied Victory
by Ben Macintyre
Out of Print--Limited Availability
Crown
May 4, 2010
Hardcover

Amazon Exclusive Essay: When Spycraft Is Not Crafty Enough by Ben Macintyre Click on Thumbnail to Enlarge Soon after Operation Mincemeat was launched, Britain’s spymasters realized they had made a glaring mistake. They tried to correct it and, in the ...

Amazon Best Books of the Month, April 2010: Maggie O'Farrell has a singular knack for sensing the magnetic fields that push and pull people in love, and in The Hand That First Held Mine, she summons those invisible forces to tell two stories. The first is the spirited journey ...

Amazon Best Books of the Month, October 2010: You'd think that after 14 novels featuring hardscrabble hero, Jack Reacher, Lee Child's pulse-pounding series would start showing signs of wear. It is nothing short of remarkable that Child is not only able to continually reinvent his ex-military cop, but that ...

21.     Skippy Dies: A Novel
by Paul Murray
Faber & Faber
August 31, 2010
Hardcover
Amazon Best Books of the Month, September 2010: Seabrook College is an all-boys Catholic prep school in contemporary Dublin, where the founding Fathers flounder under a new administration obsessed with the school's "brand" and teachers vacillate between fear and apathy when faced with rooms full of texting, hyper-tense, hormone-fueled ...

From Publishers Weekly
The Hollywood-ready latest from Nicholls (The Understudy) makes a brief pit stop in book form before its inevitable film adaptation. (It's already in development.) The episodic story takes place during a single day each year for two decades in the lives of Dex and Em. Dexter, the louche public ...

24.     Country Driving: A Journey Through China from Farm to Factory
by Peter Hessler
Harper
February 9, 2010
Hardcover